Intel has officially launched its new Ivy Bridge line of processors, following a series of delays. The chip manufacturer’s new 22nm processors will first appear in Core i5 and i7 flavours aimed at desktops and large notebooks – just in time for the slimline iMacs packing Core i5 and i7 processors that are reportedly arriving in June.

They’ll be followed by lower-end Core i3 and i5 chips and low-voltage processors designed for ultrabooks – which should fit nicely in the new line of MacBooks that are reportedly ditching Nvidia graphics in favour of an Ivy Bridge-only solution.

As well as offering native support for USB 3.0, Intel claims that its Ivy Bridge processors deliver 20 per cent higher performance, while using 20 per cent less power, than their 32nm Sandy Bridge predecessors. We’ll be looking to put those claims to the test when we get our hands on some computers packing Ivy Bridge – which will, we’re hoping, be sooner rather than later.

5 of the best yellow gadgets

Thinner and lighter, but with more CPU muscle 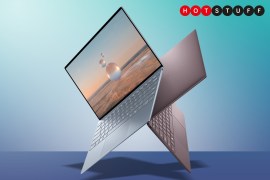