It’s just a couple of days since Motorola announced its intention to head back to the top of the mobile heap. And properly this time – the Atrix is the most powerful phone in the world, if you believe the hype. We thought we’d better head over to Moto HQ to see if that claim stands up.

Let’s start with the basics: the Atrix is not a shy beast. It flies around Android 2.2 (it’ll be getting Gingerbread 2.3 in time) like an X-Wing round the Death Star, admittedly with fewer explosions. When we went hands-on with Google’s Nexus S, we said it had managed to overcome Android lag; the Atrix puts that performance in the shade.

Motorola’s gone with an LCD display, rather than OLED, citing lower power consumption when displaying whites. The QHD screen is nice, but doesn’t have you reaching for the sunglasses in the way some of the new screen tech we’ve been seeing does. In the hand it feels solid – not iPhone 4 bulletproof, but there’s no give to the tightly-fitted plastic surround. A nice touch is the top edge power button that doubles as a fingerprint scanner.

But it’s more than just a phone. If anything, the peripherals surrounding the Atrix are almost as important as the handset. Dock it in the standard dock and it’ll jolly along as an alarm clock (nice enough), but break out the HD multimedia dock and you’re feeding 1080p images straight to your flatscreen via HDMI.

Then there’s Webtop, and this is where the Atrix stops being a phone and starts becoming a computer. Full-fat Firefox, HD video, PC-like file support and Citrix Windows virtualisation gives you a powerful processing base, while a Bluetooth keyboard (with Android nav keys), mouse and remote mean you can bin the rest of your computing set-up. Because it’s hilariously fast (thanks to its dual-core processor) and because it has Nvidia GeForce graphics and a full gig of RAM, that’s almost not a joke.

Sensing that this is verging on reality (and it would actually be totally doable), Motorola’s built a laptop shell with no computing power, but a keyboard, trackpad, screen and a pair of batteries that’ll run for seven hours while charging the handset (which has a claimed 3G talk time of nine hours).

It’s coming here in the first half of the year through Orange, but Motorola’s not giving us any more than that and point-blank refused to talk about price. That could be a sticking point, but if you were thinking of getting a phone and a netbook, and the Atrix’s price is less than the pair combined, this is your next both. Seriously.

Our guide to the best wireless charging pads for Qi-compatible phones like Apple, Samsung or OnePlus 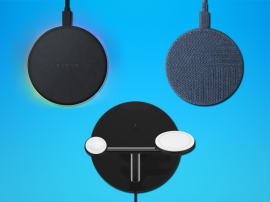