Home / News / Cheapest ever Echo Dot deal: Bag yourself a Dot for less than £18

Amazon UK has dropped the price of an Echo Dot to its lowest price ever – there is a slight snag though, you need to be a new Echo customer and you also need to take out an Amazon Music Unlimited subscription. However, there is one month of Music Unlimited included.

The latest version of the Echo Dot was launched in 2020 and binned the round ‘puck’ shape in favour of a sphere, like the bigger Amazon Echo. The latest Dot is no slouch in the audio department, with a 1.6in front-firing speaker. There’s also a Kids Edition, too.

In addition to its standard smart home features, Alexa can be expanded with skills ranging from the useful, such as playing BBC Radio stations or getting recipe ideas in the kitchen, to the silly and child-pleasing such as collections of rude sound effects. You can listen to Audible audiobooks – another Amazon company – and control all kinds of third party devices including robot vacuum cleaners, Smart TVs and smart speakers. You can also integrate Alexa with software including calendars from iCloud, Google, Microsoft Office and more, get data from your Fitbit and control smart plugs. 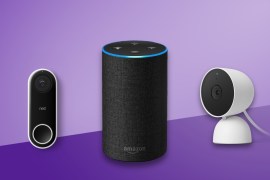