Despite not producing any new touchscreen hardware in a while, BlackBerry has clearly not given up on tablets, with a 10in PlayBook on its way to succeed its 7in older brother. The iPad-sized PlayBook was leaked in photos on Tinhte in what appears to be a finished form.

The new tablet from RIM features what looks to be a 3:2 display, unlike the original PlayBook’s 10:6 screen. There also appears to be a SIM tray for rumoured 4G connectivity. The final piece of information revealed is that the battery will be a 26.82Whr juice-pack – similar to that of the iPad 2, but way smaller than the iPad 3’s, suggesting it won’t have a ground-breaking display.

With the BlackBerry 10 OS delayed until 2013, it’s anyone’s guess when this super-sized Playbook is going to hit the shelves.

Like the Oscars for smartphones, except we managed to get the winners right first time 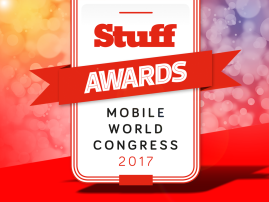