The MacBook Air 2011 is the first cage to ship Mac OS X Lion in all its glory, but can this sexy slender body contain the beast?

Desite the upgraded innards there’s no signs of it putting any podge on. Now to see if they’ve got it weighted right for a one handed lid-lift.

Perfect lid opening with just one finger – the MacBook Air combines daintiness with strength, ingeniously. And what’s this on the sides? An almighty Thunderbolt port, two USB 2.0s and now a space for your SD card. All you could ever need, without USB 3.0 (but then you’ve got the superior Thunderbolt anyway).

The ease of opening isn’t only physical but extends into Mac OS X Lion, which let’s you port all your important bric-a-brac from another computer – even a PC. Take that Steve Ballmer.

No it’s not a scene from Tron. The backlit keyboard has returned by popular demand and appears brighter than ever. Huzzah!

Multi-touch is just what you want with this sexy crotch-top computer – the more touching the better. Want to know specifics? Read our Need to know – MacBook Air 2011. 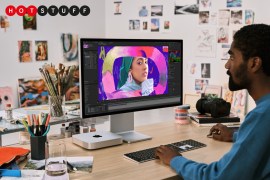